I’ve had a thing for mythology since I was a kid, and Daphne and Apollo is one of my favorites.  I had it in my head to do a Daphne and Apollo themed shoot for…oh, since I started shooting, basically, but I needed the right people.  Lily VonTrapp shared my enthusiasm for the idea when I brought it up, and I met Landon Chance at a fashion show and knew he was my Apollo.  He didn’t even flinch when I presented him with semi-obscene gold shorts.  We shot this in Carkeek Park, Seattle (while attracting side glances from passersby as I turned the rest of Landon gold).

Daphne, a naiad (water) nymph was determined to remain unmarried and untouched.  Apollo, the sun god fell in love with Daphne after Eros, the god of love shot Apollo with an arrow in retaliation for mockery.  He completed his vengeance by shooting Daphne with a different arrow designed to make her downright loathe Apollo.  What did we learn?  Don’t mock the god of love… 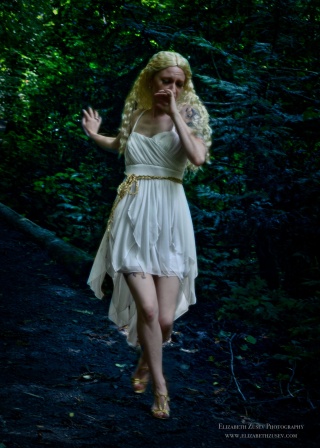 Trying to dodge one of the more powerful gods clearly presented a problem. Resourceful nymph that she was, Daphne appealed to her father Peneus, the river god for help escaping Apollo’s clutches.  (Special guest appearance here by David Frank as Peneus).

In order to escape from Apollo, Daphne had to sacrifice her body form so Peneus could use his powers of transformation…and seriously, what father would want their daughter with a guy like that?

Daphne elected to turn into a Laurel tree instead of succumbing to the sun gods desires.

Apollo grieved this loss and vowed to love her forever, crowning himself from leaves from the newly formed laurel tree…you know, when he wasn’t busy trying to bed the wives of other gods.

No means no, even if you are a legit god.  Get with it, Apollo.

HUGE thank you to the magical humans that made this happen!

2 thoughts on “Daphne and Apollo”